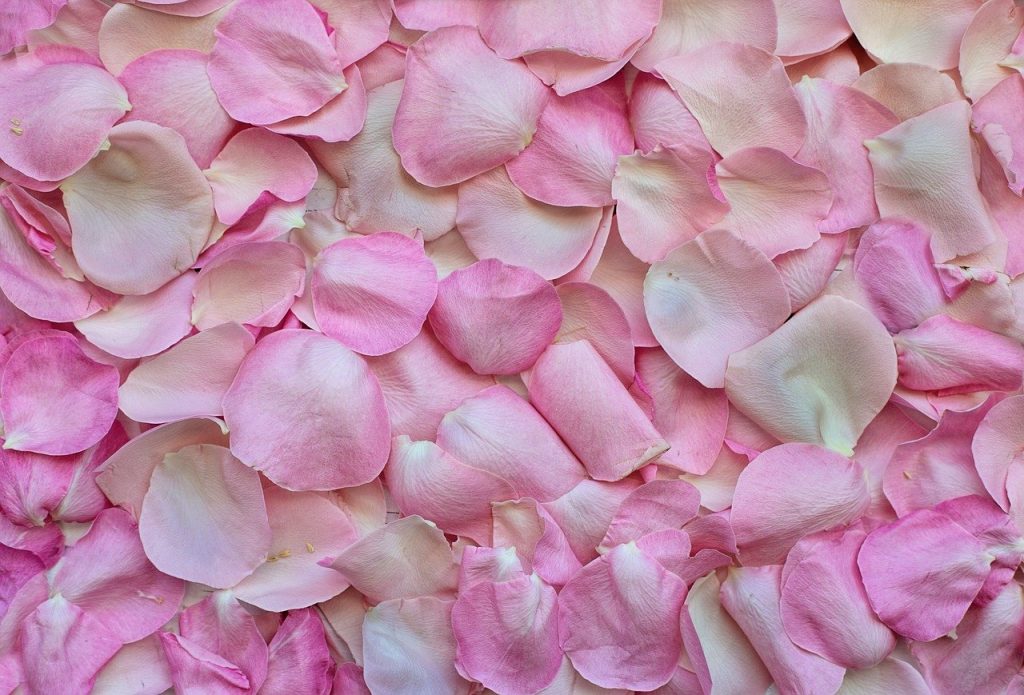 Couples plan a Scottish wedding for a wide variety of reasons:

Whatever the reason, couples (rightly) want to marry in Scotland. But once the decision has been made to get married in Scotland you need to plan the day. There are hundreds of Scottish wedding traditions and customs and you may want to include some of them in your day. It’s not the law, but it is a nice nod to over a thousand years of tradition. And when you do them, it is good to be able to explain why to your guests who may want to know. Did you know for example that the phrase ‘tying the knot’ comes from Scotland? Why, and what does it mean? Stay tuned and all will be revealed.

The Scottish wedding ceremony has evolved over time to suit the prevailing thinking and customs.

So, as you will discover, many Scottish wedding traditions remain, and they are way more than just wearing a kilt.

Join us on a trip through the ages to discover the most (and least) well known Scottish wedding traditions, so you can decide which to include when you tie the knot.

Wedding traditions involve more than just the day itself. Many traditions occur in the lead up to the wedding and have a lovely symbolism. 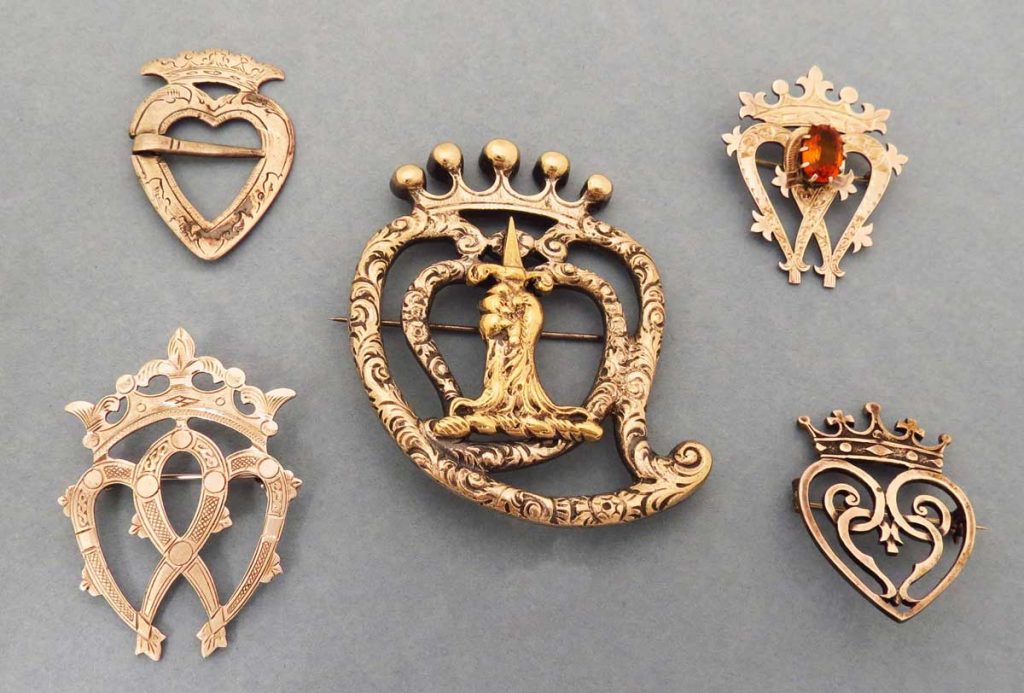 A Luckenbooth brooch is a small piece of Scottish jewellery featuring two intertwined hearts sitting beneath a crown. A Luckenbooth would typically be made from silver and can be engraved or mounted with precious or semi-precious stones.

The Luckenbooth would be given by a man to his bride to be as a symbol of his love and their betrothal. They were traditionally believed to bring luck and ward off evil spirits.

The name derives from an old Scots word for a lockable stall. The Luckenbooths of Edinburgh, were where jewellery used to be sold, including brooches such as these. The Edinburgh Luckenbooths were located on The Royal Mile near St Giles Cathedral and were the city’s first permanent shops dating back to the 15th century.

The tradition of washing the bride’s feet on her wedding day was common in the East of Scotland, in Fife, Dundee and Angus. The bride would sit while a more senior, normally happily-married lady from the bride’s family would carefully wash and dry the bride’s feet.

This wedding tradition might be linked to the bride being pure on her wedding day. If you have somebody in mind for this job, it is probably a good idea to let them know in advance!

Not unsurprisingly, this wedding tradition is not as popular as it used yo be! The groom would be required to carry a creel (Scots for a large basket) filled with rocks around the village until his bride comes out of her house to kiss him.

In another version, in Southern Scotland, a basket is tied across the church door with a ribbon. Following the wedding ceremony the newlyweds would cut the ribbon and the basket would fall to the ground. This Scottish wedding tradition was believed to bring health and wealth to the couple. Though current thinking is that it would bring lower back pain and law suits!

AT THE KIRK DOORS

One of the oldest Scottish wedding traditions is for the bride and groom to exchange their vows outside the front entrance to the kirk (Scots word for church) with their guests in attendance.

The couple would then enter the kirk for the traditional wedding ceremony.

BRIDE TO THE LEFT OF THE GROOM

In Scotland, a long long time ago, a bride was seen as a ‘warrior’s prize’ and as such the man would hold her with his left hand. This left his right hand free to use his dirk (short sword) to fight off his soon-to-be in-laws who may object to their union.

Thankfully, this wedding tradition is out of favour with modern couples, though the custom of the bride standing to the groom’s left still exists.

The word confetti comes from Italian and means “candied”. For an Italian wedding, it refers to sugar-coated almonds. This has a special meaning at a wedding. The almond symbolises the bitter-sweetness of marriage and the beginning of a new life. In the UK, however, confetti comprises colourful paper shapes that are thrown at the bride and groom as part of the wedding ceremony.

People used to throw rice at the bride and groom, but it was replaced because it was prone to cause injury. Probably some health and safety bureaucrat risk-assessed the practice and found it too hazardous!

A Dolly bag carried by the bridesmaids contains the confetti to be thrown.

An oath given by water or over a stone was said to make the marriage binding. Over time, the tradition has evolved into the bride and groom joining hands on a stone as they recite their vows.

In some parts of Scotland, the couple will carve their names into the bark of a tree or on a stone. Some such bridal stones still exist across Scotland today.

Nowadays, guests decorate small stones by etching the bride and groom’s names or initials and the wedding date.

PLEDGING TO PROVIDE AND PROTECT

The groom would offer his dirk (Scottish dagger) as his pledge to defend their home. The bride in turn would give him a bible which carried the same meaning.

These wedding ceremony traditions are still observed by some Scots to this day. 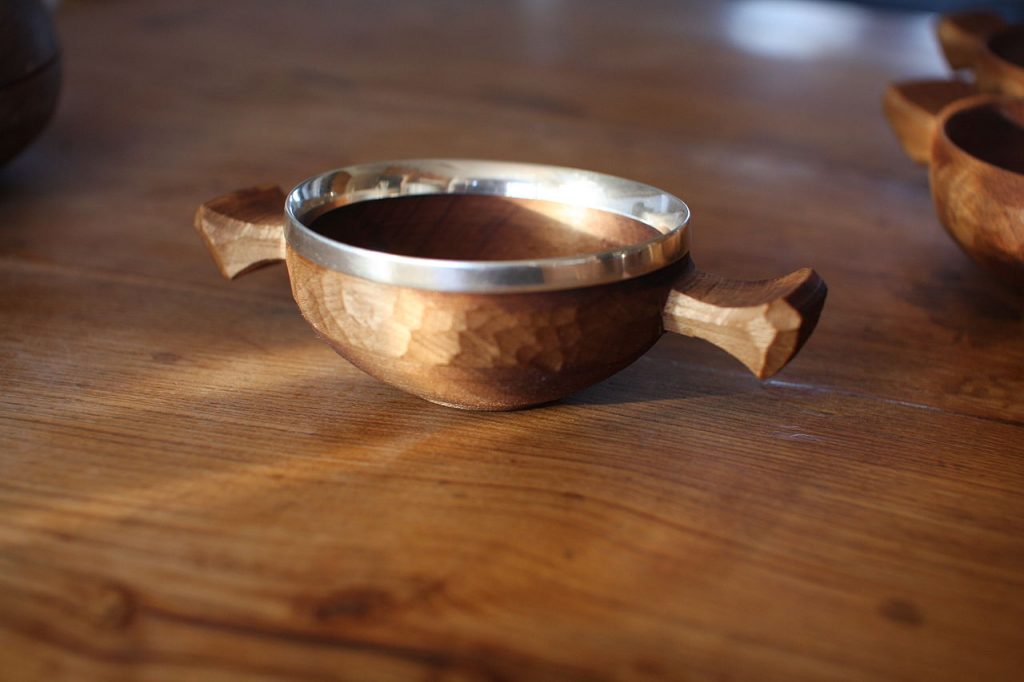 The quaich is one of the most popular Scottish wedding traditions that is still in common use. A quaich is a two-handled ‘loving cup’ for the wedding feast. The couple will take their first Holy Communion together to symbolise their union. The quaich is also used for their first toast as a married couple.

The symbolism of the quaich and sharing a drink from the same cup was traditionally the joining of two clans. The union, it is hoped, would bring peace and prosperity to both families.

Traditionally neat whiskey or brandy will be the dram of choice to be served from the quaich. Much to the dismay of many a bride.

Lord Hardwicke passed the Marriage Act in 1754 declaring that marriages had to be held within a church and both the groom and the bride needed to be over the age of 21.

However, as Scotland had its own legal system, this British law was broadly ignored and soon English couples were crossing the border to tie the knot.

Gretna Green is today the second most visited site in all of Scotland, only beaten by Edinburgh Castle.

Scottish grooms would be expected to pledge to ‘provide and protect’ to which end he would bring his ‘siller’ or silver (usually coins) to the ceremony. 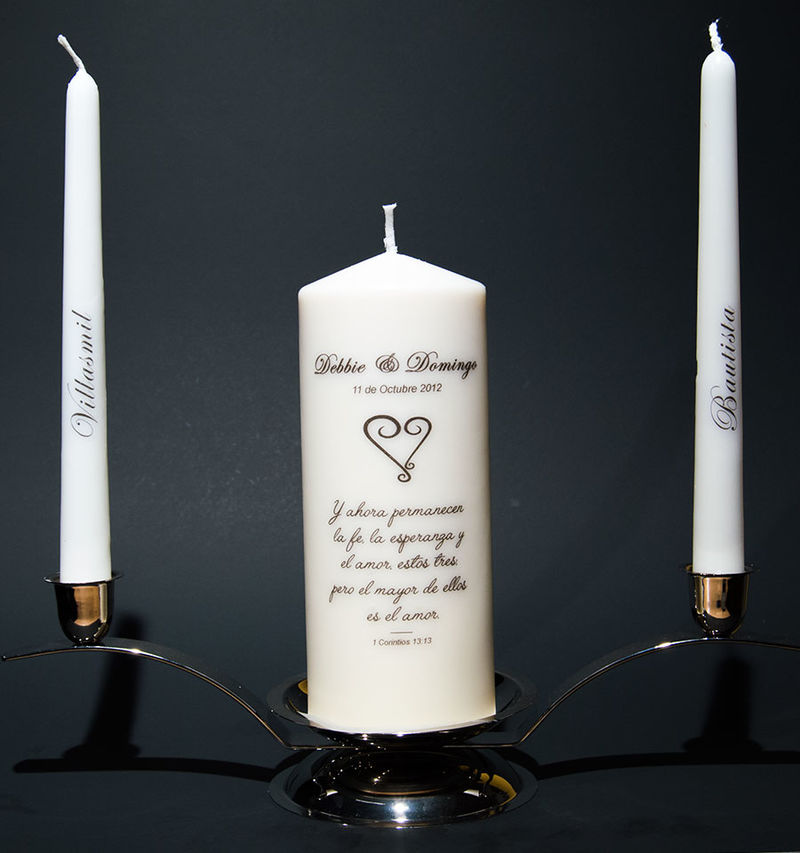 For good luck, a bride is supposed to have something old, something new, something borrowed and something blue on her wedding day.

Scottish traditions also offer some interesting charms for luck that are still used to this day. A sixpence in the bride’s shoe and a sprig of white heather in the bouquet are Scottish wedding traditions that can still be seen today.

The traditional wedding walk was a formal march by the wedding party to the church.

It would traditionally be led by a fiddler, followed by the bridegroom and the maid of honour. The bride would follow accompanied by the best man.

When the bride leaves her house to start the wedding walk, custom dictates that she should step out with her right foot first to bring good luck.

It was also regarded as unlucky for the procession to meet a pig or a funeral procession on their route. If they did, the march would have to restart from the beginning. It was also seen as bad luck for the march not to twice pass through flowing water.

Once the bride and groom had said their vows and the wedding was complete, the happy couple would lead the march to the reception, with the maid of honour and best man following behind.

Wedding rings date back to Roman times, where they believed that the fourth finger of the left hand was connected to the vena amoris or vein of love.

Ancient Scottish custom stated that the bride should have two rings — one for everyday wear and another dress ring, which was traditionally more expensive.

Once the bride and groom are officially declared husband and wife, pinning the tartan takes place. Importantly, this symbolises the acceptance of each spouse into the other person’s family.

Bagpipes have been played at Scottish weddings for centuries, and the tradition continues to this day.

The wedding piper stands at the door of the church playing as the guests arrive. He also plays as the newlyweds leave the ceremony and make their way to their car.

Bagpipes are traditionally played as the couple make their way to the top table at the reception, as well as when they cut their wedding cake.

The cake, according to tradition, should be baked at the time of the couple’s engagement. The flavours would mix into each other and become especially tasty in time for the wedding.

But only the bottom layer of the cake should be eaten at the wedding. The top tier should be saved and eaten as a celebration of the couple’s first child.