A Peaky Blinders Suit For Your Wedding?

There is no question Peaky Blinders suits are very popular – and are currently very cool. Since the Peaky Blinders first hit our screens in 2013, the iconic styles have been in great demand.

Is There Just One Peaky Blinders Suit?

The beauty of the Peaky Blinders suit is that there are so many to choose from. Each Peaky Blinder has his own look and unique sense of style. Fortunately, bespoke tailors have patterns for all of the main characters and can advise on how the suits should look.

When we think of the Peaky Blinders, most of us will have a mental image of the Shelby family walking down a cobbled street in the iconic poster from the show. This is a great place to start as it is where most men looking for a Peaky Blinders suit will be drawing their inspiration. 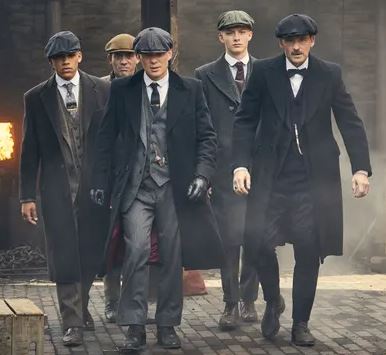 At the heart of the Peaky Blinders style is the working-class background of the characters. In the early 20th century, all men, especially working class men would have had one decent suit. And it would have been a made to measure suit.

This is not because they were wealthy – far from it. It was because firstly you would have been expected to have a nice suit, your ‘Sunday Best’ and off-the-peg suits simply didn’t exist. It would not be uncommon for suits to be passed from father to son and last for thirty or forty years. Your local tailor would alter it to fit you and you would look after it.

Because they had to be so hard-wearing, suits in the time of the Peaky Blinders would be made from very durable cloth such as a tweed. Tweed cloth is woven from pure wool – but of course there are different qualities of wool, from soft lamb’s wool to coarse sheep’s wool. And being cheaper, the itchy, coarse wool is what working class men of this time would wear.